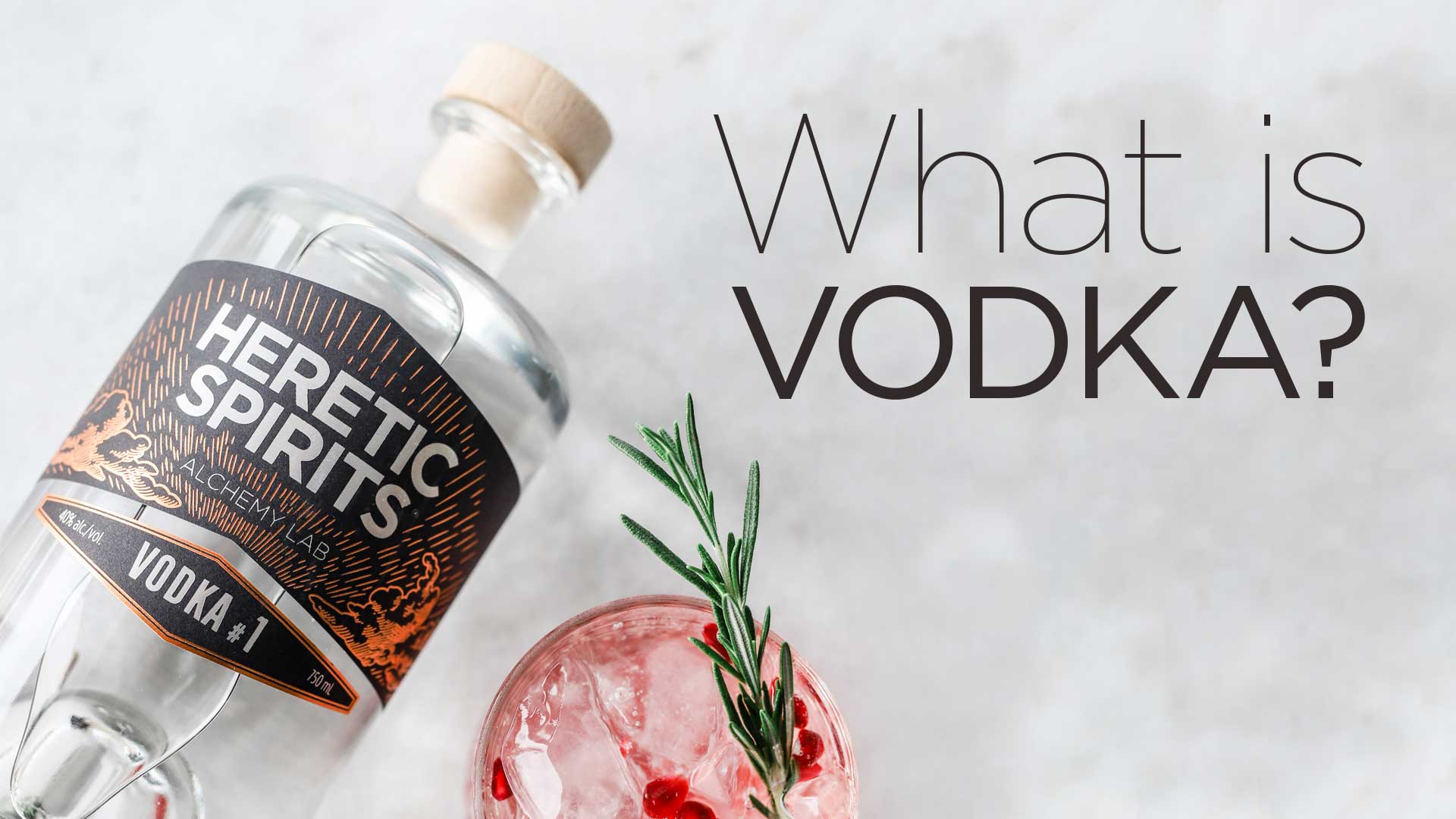 Besides a good time, what is vodka?

Vodka is a staple of countless classic cocktails and wildly popular due to its global availability, traditionally smooth finish and ability to build many palatable drinks. But do you really know your vodka? Let us properly introduce you to the Czar of Spirits.

At its most basic, vodka is an unaged distilled liquor that is clear, colourless and without definite aroma or taste, ranging in alcohol content from about 40 to 55 percent. While the exact history of vodka is still widely debated, it was first developed sometime between the 8th and 14th century with Russia, Poland, Ukraine, and Scandinavia all claiming a role in its origins. Vodkas varied wildly among these countries and in some instances was introduced as a medicine to treat everything from cold sores to fevers. And undoubtedly, modern enthusiasts will insist vodka is still medicinal, although administered as a shot or a martini.

Literally, the name vodka comes from the old Russian word voda meaning water and with the diminutive suffix -ka, it’s interpreted as little water in reference to the amount one should sensibly consume in a single serving. So next time you’re indulging, you can tell yourself: in Russia, it’s only a little water.

What is vodka made from?

Vodka traditionally starts with ingredients rich in starch or sugar like corn, wheat, or rye. Around the world, there is a huge array of brands that experiment with different bases including potatoes, molasses and rice. In North America, the production of vodka with 95% grain alcohol, bought in bulk from grain processing plants and diluted with water and flavouring is most common. This sacrilege has given vodka the undeserved stigma of being a cheap and dirty option for drinks. So to elevate your vodka experience, look to smaller distilleries that offer products in a wide assortment of flavours, textures and distilling styles made lovingly from more natural ingredients. Other ingredients that have been used to flavour vodka inventively are beets, spruce needles, buffalo grass, lemon peel, berries, peppercorns, and caraway.

Here at Heretic Spirits, we think vodka made from grains is boring. It’s what everyone is doing. That’s why our signature vodka is crafted from corn instead. Corn is a beautiful inbetweener that has the distilling power of grains with added sugar that gives it a subtle sweetness before the eventual smooth finish, turning the alcoholic bite into a mere nibble.

How is vodka made?

Regardless of what is used as the main ingredient, vodka must go through a process of fermentation and distillation. Most vodka bases start with ingredients rich in starch which are essentially complex sugars. But why complicate the matter? We use sugar-rich corn as a base for it’s subtle sweetness and eventual smooth finish. Then we heat the fermented corn mash in a still. This part of the process only makes 9 to 16 percent alcohol by volume (ABV), which is too low to be buzzworthy (or taste very good). To create vodka we need to separate the ethanol we want from the other elements we do not want. This is what we call distillation.

Distillation is the art of separating compounds from each other based on their boiling points. Whereas water boils at 100°C, ethanol boils starting around 84°C. So when we heat up the still, the vapour boiling off first is actually the product we want to capture. We process the ethanol vapour through what we call a column. In this column, the vapour circulates and becomes increasingly well refined as it travels up. It finally reaches the top and travels over into the condenser. This part of the process works just like condensation on your window in the winter. We circulate cold water through the condenser and the vapour travels down a series of tubes inside the cooled water. The vapour hits the walls of the tubes, rapidly cools and turns back into liquid. This liquid ethanol drips down and is collected by the distiller in a tank.

Now at this stage, the vodka is 95% ethanol. What a difference from the 9 to 16 percent we started with. The last stage is then the careful process of adding water to the ethanol to bring it down to the 40% alcohol content needed for vodka. Now, who said science can’t be fun?

Not all vodka is harsh but the cheap stuff certainly is because it contains 95% grain alcohol from processing plants. While bad vodka feels like burning in your mouth and throat, the good stuff takes a more joyful journey to your stomach. Quality ingredients, including the type of grain or vegetable mash and water source, have a huge effect on the end product. Smoother vodkas are made with love for the craft and it shows, or rather tastes. Using different bases such as corn, rye or wheat and distilling them with added flavours during the process yields a smoother mouthfeel and taste. There are many factors that contribute to your vodka experience, one sip of ours and you’ll find out we know them all.

Why do people put it in the freezer?

Many people choose to chill their vodka in the freezer and while this makes sense if you’re drinking a lazily-made-mass-produced-bottom-shelf-vodka, it’ll hinder your experience of quality vodka. Chilling your vodka makes it easier to drink by desensitizing your taste buds and masking the alcohol, but you lose some of the taste, texture, flavours, and personality that was deliberately added. So, we suggest choosing your vodka brand wisely and drinking it with due respect. We know a distillery you may want to check out…

Is vodka stronger than wine?

While we’ve never seen them arm wrestle, in terms of ABV, spirits are much stronger than other alcoholic drinks like beer or wine. Standard spirits are often around 35-40% ABV, meaning that they contain 35-40% of pure alcohol. In comparison, a pint of beer is often around 5% ABV, and a glass of wine is 11%. But they’ll both keep you warm on a cold winter’s night.

Is vodka good for your health?

Due to the distilling process, a clear spirit like vodka is viewed as a healthier alternative to brown liquors. While most of this evidence is anecdotal, the lower calories and less sugar positions vodka as a better option than whiskey or wine for a night out and eventual hangover. We’ve all heard an annoying friend order a vodka & soda while on their latest diet because it can be sugar-free, carbohydrate-free, and gluten-free.

Which vodka is the healthiest? Also: We are not doctors.

If you’re looking for the “healthiest” option we suggest vodkas crafted with high-quality ingredients and ones that have been made with other ingredients that are linked to health benefits. So embrace the honey-instilled vodkas, the fresh-pressed apple versions, or mix it with a little citrus to keep the scurvy away.  Please remember: Everything in moderation.

Mix at your own risk OR To mix or not to mix?

People often choose to mix their vodka with juice like cranberry or orange and while these classic mixes are an easy fix to hide the alcohol taste, there are more creative ways to compliment a proper vodka experience. For example, lime is often used as a garnish because it’s bright citrus flavour is rather sour which can help take the edge off of a stiff vodka soda. In contrast, lemon satisfies a sweeter palate and provides more of an acidic aftertaste. By adding complementary flavours to your concoctions, you can be the belle of the ball by making cocktails like the Moscow Mule or Vodka Sour. So, don’t be afraid to experiment. Hell, show off.

The backbone of classic bartending and hosting, vodka has a rich history, global popularity and extensive uses. Vodka is a base, boring drink for people who don’t know what you know so go forth and flaunt your newfound knowledge. Lift your glass and loudly cheer Na Zdorovie! It’s the only Russian we speak.

Want to learn about our vodka for yourself? Shop now!

Vodka is a distilled alcoholic beverage that is transparent. Poland, Russia, and Sweden all have their own variants. Water and ethanol make up the majority of vodka, but it can also contain contaminants and flavourings. It is traditionally created by distilling the liquid from fermented cereal grains. More recently, potatoes have been employed, and some current brands use fruits, honey, or maple sap as a foundation.

In the vodka belt of Belarus, Estonia, Finland, Iceland, Lithuania, Latvia, Norway, Poland, Russia, Sweden, and Ukraine, vodka is historically sipped “neat” (without water, ice, or other mixers), and it is frequently served freezer cooled. The vodka martini, Cosmopolitan, vodka tonic, screwdriver, greyhound, Black or White Russian, Moscow mule, Bloody Mary, and Caesar are just a few of the cocktails and mixed drinks that use it.

In 1405, the word vodka was first mentioned in Akta Grodzkie, a collection of court documents from Poland’s Palatinate of Sandomierz. Wódka was a term for medicines and cosmetics at the time, while the beverage was known as gorzaka (from the Old Polish gorze, which means “to burn”), which is also the source of Ukrainian horilka (орлкa) and Belarusian harelka (арлка). The word vodka originally appears in Cyrillic in 1533, in reference to a medicinal drink brought from Poland to Russia by Kievan Rus’ traders.

Although the word vodka can be found in early texts and lubok pictograms, it was not until the mid-nineteenth century that it began to emerge in Russian dictionaries. It is glossed with Latin vinum adustum in Sámuel Gyarmathi’s Russian-German-Hungarian lexicon, published in 1799. (“burnt [i.e. distilled] wine”).

The word vodka first appears in English literature in the late 18th century. Johann Gottlieb Georgi properly explained “kabak in the Russian language implies a public establishment for the common people to drink vodka (a form of brandy) in” in a book of travels published in English in 1780 (probably a translation from German). In 1799, William Tooke translated vodka as “rectified corn-spirits,” referring to any grain, not simply maize, in the conventional English definition of the word “corn.” Théophile Gautier interpreted it as a “grain liquor” offered with meals in Poland in 1800 in French (eau-de-vie de grain).